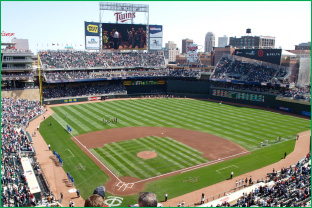 As water conservation becomes an increasing concern, many stadium and arena operators are implementing different methods to improve water stewardship. They are doing this for environmental reasons and saving money in the process.

In some areas, local utilities are helping. Stadium Management Company, which runs Sports Authority Field at Mile High in Denver, received a rebate from Denver Water worth $60,000 or 40 percent of what it paid for a new irrigation control system. The system has moisture sensors under the stadium’s turf and more water meters around the 89-acre site to better track water use. Tracking water use in this way means the irrigation system only runs when the moisture levels require it. If it’s raining, the irrigation system senses there’s no need to run. The company also received $18,000 in rebates for other reductions in water use, such as the installation of toilets that use about 20 percent less water per flush for the stadium’s 144 luxury boxes.

Several other venues have had excellent results installing water conservation systems. The Anschutz Entertainment Group, which runs the Staples Center in Los Angeles, has replaced all 178 of its urinals with waterless urinals, saving more than 7-million gallons a year and $28,200 annually. At the StubHub Center in Carson, CA, recycled water is used to irrigate playing fields, saving about 35 Olympic swimming pools of drinking water each year. Citizens Business Bank Arena in Ontario, CA, uses reclaimed water to fill cooling towers, saving about 115,000 gallons of potable water each week.

How Water Works at Target Field

Another big environmental endeavor in sports involved Target Field, the stadium built for the Minnesota Twins, in 2009. The options for building a water conservation system were limited because the venue’s water and wastewater piping systems were already built. The Minnesota Ballpark Authority called on the help of Pentair, a global producer of sustainable water solutions, to work around this challenge. The result was a custom-designed rainwater recycling system. The ground at Target Field is made up of multiple layers. Grass filters water into a sand layer, underneath the sand is a rock layer and then the water goes into a complex drainage system where it can be thoroughly cleaned through the Pentair filtration system. The filtered and treated water is then used to clean the stadium.

The custom rainwater recycling system is good for the environment and good for baseball. Target Field saves nearly 2-million gallons of water each year with their green solution, and games are able to resume much faster after rain. Kevin Smith, Executive Director of Public Relations for the Twins, says, “You’ll go out there half an hour after a rain storm and it’s like it never happened.”

Winning Technology On and Off the Field

How is this state-of-the-art filtration system kept up and running? PeopleService contracts with Pentair to provide the service and maintenance for the system on a weekly basis. “We make sure the chemicals are at the right levels and the entire process is functioning properly through our intensive checklist,” said Shawn Wilson, the PeopleService operator on the project. “We are on-call for emergency situations, such as a water break, or any other issues that may occur,” Wilson added. What does working at Target Field mean to Shawn? “I think it is awesome that everyone of us on this team has a part to play. So, knowing that I am able to contribute to an amazing team who cares about the environment and looking for ways to better it, is a win for me!”

The rainwater recycling program, along with several other sustainability projects, has enabled Target Field to become the first professional sports facility to receive LEED (Leadership in Energy & Environmental Design) Gold Certification. Whether you’re a baseball fan or not, this ballpark is a great starting point for a study in creating a more sustainable world.

Communities turn to PeopleService for water and wastewater solutions. See the different solutions we provide and let us know the challenge you need help with.

Drinking Water Week
Water Still Flowing, but at a Reduced Rate
Three Tips When Fertilizing the Lawn
Seven Steps to Ensuring All Systems are Go Before Re-Opening

We Are Here to Help
Some Good News
CDC Advice for Water and Wastewater Operators
City of Biwabik Improves ISO Ratings and Gets Reduction in Fire Insurance Premiums
Top Tip: We don’t care what that label says…Wipes are NOT flushable!

Taking a look at outsourcing trends in our industry.
Are you ready to outsource water/wastewater operations?

Swamped in Billing? We Can Help
Top Tips: Four Steps to Flood Resilience
Are You Prepared for Spring Floods? PeopleService Experts Plan to Protect
Your Seal of Assurance

SPOTLIGHT Get to know Chris McMillen – our new Director of Sales.
The manganese menace in Nebraska

Spotlight on Chris Cowell
Did you know?

White: Patience of a saint…great to work with…always helpful.
Frozen Water Pipes
Did you know?

Happy Thanksgiving
Service Solutions
Tips to Pass Along in Your Community

Working with Labs to Make It All Work
Clarinda Lab Works with Harry Ridnour at the Helm
Tips: Comparing Methods of Disinfecting Wastewater

Old and New – a Powerful Combination
Russellville, Missouri Makes a Change for the Positive
Spotlight on Steve Guthrie
Damaged Sewer Lines Are Expensive for Homeowners

Recycling Phosphorus in the Form of Sewer Sludge Offers Long-Term Benefits
Webinars Built to Inform
The Power of Outsourcing Works in Bethany, Missouri
Did you know?

Contract Operations Takes the Uncertainty Out of Water Management, Compliance and Safety
PeopleService Builds Strong and Productive Partnerships
Top 3 Reasons to Partner with Us

From Soup to Nuts, We’ve Got You Covered
Why Outsourcing in this Field is Not a Naughty Word
Spotlight on Herb Krueger
How to know if you’re ready to outsource…with us.

Humboldt, Iowa and PeopleService Enjoy 21 Year Partnership
Spotlight on Steve Robinette
Three key services to protect your infrastructure – and your investment!
The REAL Cost of Infrastructure Decline
PeopleService is on the GO!

PeopleService Hits a Home Run in Arlington, MN
Spotlight on Jason Rossow
Did you know?
Education Fuels the Power Behind PeopleService
PeopleService Honored by Minnesota Pollution Control Agency
Diving in so we have a depth of knowledge for you.
PeopleService is on the GO!

Virginia, Minnesota, the Queen City of the North
Spotlight on Paul Christensen
Did you know?
The Great Minnesota Phosphorous Debate
Where in the world is PeopleService?

PeopleService Beams Up New Partnership with Riverside, Iowa
Spotlight on Dennis White
Did you know?
Reverse Osmosis Keeps Your Town Safe From Nitrates
We’re On the Road for Key Industry Shows. Come See Us!

Valley Has Always Been Committed to Running at Peak Efficiency
Spotlight on Duane Grashorn
Did you know?
Elevated Levels of Radium in the Water Supply
PeopleService to Participate in League of Nebraska Municipalities 2017 Midwinter Conference

Appleton is a Shining Example of a Great Partnership
Spotlight on Greg Stang
Did you know?
Frozen Water Pipes

Clarinda and PeopleService Partner for 23 years
Spotlight on Steve Guthrie
Did you know?
We Always Put Safety First