Quick Thinking From Jared and Kim May Have Saved a Life. 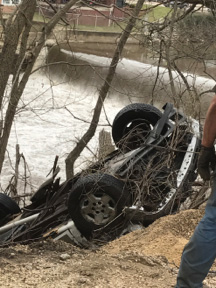 Kim Werger, PeopleService lead operator for Elkader, IA, was conducting water sampling around town with water operator Jared Burkle when they got a call over their scanner: A truck had veered off the road and into the local Turkey River and two people were trapped in the fast-moving current. The truck was almost entirely submerged, with only the roof above water.

Typically, this wouldn’t be something that a water operator would be involved in. But Jared, who was raised in Elkader, also contributes as a volunteer for the local fire department.

At that moment, the men understood that water sampling would need to be put on hold.

Lending A Hand – And a Paddle

When Kim and Jared arrived at the scene to assist the firefighters already on site, they quickly assessed the situation. Rescue workers had maneuvered the two passengers onto the roof, but they had no safe means of getting them to shore. The current from the nearby dam was too fast-moving to navigate without some sort of protection.

Thankfully, the PeopleService team had an idea.

“We realized pretty quickly that they needed a boat,” said Jared. “And we just so happened to have one for greasing aerator motors in the treatment lagoon.”

When they returned from retrieving the PeopleService paddle boat, however, they encountered a problem.

“We tried to come at it from downriver, but there was no access,” said Jared. “The water was just too high. I tried to walk it upstream but we couldn’t make any progress.”

Together, they and the other firefighters came up with a solution. They would lower the paddle boat from the dam upriver, and then Jared would walk the boat toward the passengers.

Equipped for the Job

While rescue workers who arrived earlier to the scene had enough time to put on ice water wet suits that offered insulation from the cold water, Jared had just his PeopleService uniform and PeopleService life jacket. Nevertheless, he saw what had to be done and entered the 45 degree water anyway. 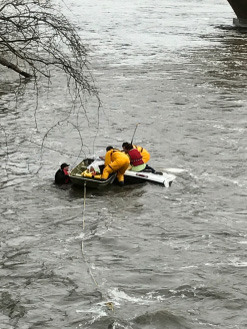 “Jared walked out and steadied the boat in the neck-high water and then walked the passengers in,” said Kim.

Images captured at the scene highlight the water rescue. As you can see, Jared is the one up to his chin in the water, securing the paddle boat while the others helped the victim aboard.

Two people were in the truck when it went into the water. The woman in the passenger seat was shaken up but relatively unharmed from the incident, but the gentlemen who drove the truck sustained more serious injuries. Jared and the other rescue workers tended to him first, helping the man onto the boat as carefully as possible and then, once he was strapped in safely to minimize the risk of further injury, they slowly but steadily maneuvered him back onto shore. They then helped the passenger get to shore before both were taken to a nearby hospital.

Just another day in the life of a water and wastewater operator? Not exactly. But it’s precisely this kind of dedication to the community that sets our team members apart.

“We’re always willing to help the community,” said Kim. “We listen to the scanners and help out however we can, lending a hand to the police and fire department if they need someone to provide traffic control for a car accident or fire or assist in some other way.”

“I got my degree in criminal justice, and I appreciate how important education is to this company,” said Jared. “We have safety in-service training frequently, so we’re prepared for whatever comes our way. I’ve been with PeopleService for just over six years now and what I love is that every day is different. You could be flushing hydrants or doing oil changes one day and then driving out to Monona or 5 or 6 other towns to lend a hand the next.

“Water rescues aren’t exactly in the PeopleService safety training, but other facets of that training prepare operators very well.”

We’re honored that Jared and Kim continue to bring their exceptional skills and compassion to the community served by PeopleService. Thanks to their quick thinking and helping hands, a dangerous situation had a happy ending.

Check out KCRG’s coverage of the rescue: